The Aftermath of the Homecoming of Workers

Migrants are one of the important driving wheels of the Indian Economy. India’s Construction industry, Manufacturing, transportation sectors are major employers of these workers and it is because of them these sectors keep on moving. Although, they play an important role and contribute towards India’s growth, very little is being done for their well-being. The term migrant workers have long been associated with the people moving from rural to urban areas. But, if one goes into the detail of the entire migration process and migrant workers, a different scenario also comes out. Data given by the National Sample Survey in 2007-08 revealed that about 28.3% of India’s workforce comprises migrant workers. According to the census of 2011, there were 454 million migrants in the country which rose by 139 million from 315 million in 2001. The association of migrant workers with the movement of individuals from rural to urban areas might be because it takes around 22.1% of the share of all the migrants. But a detailed study of the data presented by the Report of The Working Group of Migration under the aegis of the Ministry of Housing and Urban Poverty Alleviation presents a different picture. According to the census, the migration of people from rural to rural areas accounted for 47.4% and was followed by urban to urban migration at 22.6% (according to the census, 2011). 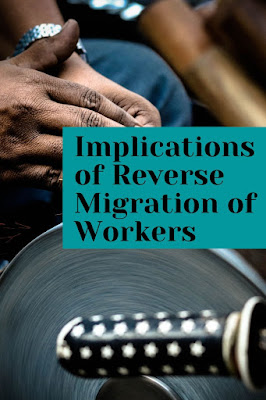 These rural to urban migrants, who work mostly in unorganized sectors were out of work and money in their new home during the nationwide lockdown, thanks to Corona Virus. As the period of lockdown increased, the patience of these workers suffered a major jolt. The immediate result of this was, various clashes with security personnel’s in different parts of the country and this resulted in the demands of bringing back them to their native places. Indian railways started plying special trains with ‘Shramik Express’ to ferry stranded people back to their homes.
The homecoming of these workers will present their employer states with a crunch of the labor force and will in turn adversely impact the various industries which depend on them. Karnataka and Haryana government even requested the workers to stay and avoid traveling to their native places. But with the chances of industries to start up soon looking bleak and further distress faced by them concerning food and money, they remained adamant about their demands. The challenges faced by their native states are also not less. With the coming back of people in large numbers from various COVID hotspots, they face an additional risk of preventing the spread of disease.
Opinions:
With the spread of disease and the implementation of lockdown, the ferrying of workers was a very commendable step that was undertaken by the government. However, the time they took to reach this decision can still be debated. The people blaming the states and central government for delay in evacuating them need to understand that the parent state of these workers need to have a proper infrastructure in place to cope up with the sudden influx of people in large numbers, and this infrastructure is not developed in a day when the entire country is already facing various shortages. The problems with the employer states will be visible when the lockdown is lifted and all activities will start taking place gradually. They will face a labor shortage in running their industries and projects and getting the heartbroken laborers back won’t be an easy task. For this, they will have to provide some incentives to attract and provide a comfortable environment for them by winning their trust. The states who are bringing them back need to be ready and put in detailed measures to prevent the spread of disease in their states and most importantly to the rural areas they will go back. Most importantly, people need to stop stereotyping migrant workers with people who move from rural to urban areas in search of better jobs or other facilities. This is a small way to give them respect, as they are an important lot who work for uplifting India’s economy.
References:
1) http://www.aajeevika.org/labour-and-migration.php.
2) COVID-19 creates more uncertainty for migrant workers in India retrieved from https://globalvoices.org/2020/04/23/covid-19-creates-more-uncertainty-for-migrant-workers-in-india/
3) Report of The Working Group on Migration, Published by the Ministry of Housing and Urban Poverty Alleviation in January 2017.

Popular posts from this blog

What to look for in India’s Education through National Education Policy-2020???

May 04, 2021
The Union Cabinet, Government of India approved the National Education Policy and it was made public on 29th July 2020. This education policy replaces the old National Policy on Education brought in 1986. The National Education Policy, 2020 is based on five pillars of Access, Equity, Quality, Affordability, and Accountability. This policy will definitely help in improving the quality of education in India at both schools and in higher education. It will provide enough resources to students at all levels to develop their skills and compete at a global level. Some important highlights of National Education Policy-2020 are: SCHOOL EDUCATION Providing Universal Access at all Levels of School Education - Apart from imparting school education to all at pre-school to secondary, the government aims to bring nearly 2 crore school dropouts back into mainstream education. This process will be facilitated by imparting education to students through both formal and informal mode. It will be achieve
Post a Comment
Read more

May 04, 2021
The education system is generally divided into two categories a) School Education and b) Higher Education. Being such a large country and supporting a huge population the Indian government spends 4.6 percent of its GDP on education and ranks 62nd in total public expenditure on education per student . Is this amount sufficient??? Well, that discussion is for some other day. But what we need to discuss is the challenges the education system is facing in the current era. Although it is true the government along with policymakers is working to improve the quality of education system both at school level and in higher education. It has called for bringing a new education policy that was framed in 19826 and last updated in 1992. Through the New Education Policy , the government might take some steps to enhance the quality of education at all levels. It is believed to be more tech-savvy to keep the students in tune with the current scenario. The government, however, has taken certain steps
Post a Comment
Read more

6 Tips for choosing an Engineering College

May 04, 2021
With the announcements of fresh dates of JEE Mains (taken up by approximately 9.5 lakh students for getting in BE or B.Tech programs) and Advanced Exams, the admission season will soon begin in India. Depending on the results, some will go to IITs, NIT’s or other government and private colleges spread across the country. The option of getting into the preferred college becomes easy for a student who secures good ranks, but the dilemma among the others continues. All the IIT’s, NIT’s, IIIT’s and other GFTI’s combine for a total of approximately 40,000 seats. The rest of the students, thus fall into a painful exercise of choosing a better college from a vast pool of available colleges. This initial step of deciding a better college becomes very important as your entire future (or major part) depends on this very decision. Cleared JEE and got into IITs, NIT’s, IIIT’s , or any other reputed GFTI’s??? Congrats, Go ahead and take it, and all the best for the future!!! Not able to get into a
Post a Comment
Read more